How To Clean Toilets 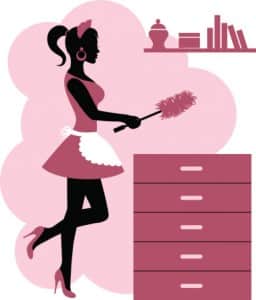 Basic Tools:
In 1938, Sani-Flush produced an advertisement which showed a woman cleaning a toilet while wearing a dress and heels. “It’s no trouble to keep a toilet sparkling clean and sanitary.” It reads, “You don’t even have to touch the toilet with your hands. Just sprinkle a little Sani-Flush in the bowl. Flush the toilet and that’s all!”[1] Ah, those were the days. Toilet water was blue and Franklin Roosevelt was president.
Unfortunately, Reckitt Benckiser discontinued Sani-Flush in 2009 because it was found to cause environmental problems.[2] (Reckitt Benckiser acquired the brand from Boyle-Midway in 1990.)[3] Now, instead of heels and a little sprinkle, both men and women may want to utilize a different process when cleaning a toilet – heels are still optional, however.
The basic tools include a bowl swab or scrubber, cloth, and a mild to aggressive bowl cleaner depending upon the hardness of your water.

Have you ever noticed a green or orange colored stain around the underside rim of a toilet bowl? Or near the base of a drinking fountain? If you conducted a pH test on those stains you would find they fall on the alkaline side of the scale. Alkali builds up over time, creating visible mineral deposits, commonly found near a water source. Water has many minerals, and hard water has even more minerals. If you understand the pH scale you know that in order to clean alkali you need an acid cleaner. Hard water will require a higher concentration of acid than will softened water, as will restorative cleaning vs. daily maintenance.

Flush first. This may seem obvious when the last occupant leaves you a special surprise, but even when the water is clear it is good to give it a flush first. That gives you a wet bowl and fresh water with which to work.

Apply bowl cleaner to and around the inside rim. Allow dwell time.

Spray your cloth with a general purpose cleaner and wipe the bowl exterior including water tank and toilet seat.

Swab or scrub inside the bowl, paying particular attention to any hard water stains.

Flush until water is clear.

Spray a disinfectant around the base of the toilet and allow it to air dry.

A Note of Patience:

The number one problem with any cleaner is the person applying the product. If you’re anything like me, you want to get in and get out – no sense spending more time cleaning a restroom than you have to, right? Wrong. Patience will go a long way in solving your cleaning problems. Dwell time is an important ingredient of any chemical composition, and the longer an acid etches into that alkali buildup the less you have to scrub.

A Note of Caution:

According to court documents filed to the United States Court of Appeals, Sixth Circuit, Mrs. Bessie Mae Sheppard was visiting her friend, Barbara Large, on January 23, 1988 when both ladies attempted to clear a clogged kitchen drain. Mrs. Sheppard, being the ex-wife of a plumber, quickly took charge of the situation. She attempted to clear the drain by first using a plunger. When that failed, she poured both Drano and Liquid Plumr into the drain, but neither product produced the desired results. Finally, she added Sani-Flush to the mix of liquids already in the drain, producing a small puff of smoke. Undeterred, Mrs. Sheppard added more Sani-Flush, inadvertently allowing a big glob to enter the drain at which point a large cloud of smoke arose. Both women were driven from the house and eventually found themselves in a hospital where Mrs. Sheppard later died from cardiac arrest.[4]

Bowl cleaners should only be used to clean toilets, and they should never be mixed with other chemicals. These are strong acids tailor made for a specific function. Please use them accordingly.