How Do Neutral Cleaners Work? 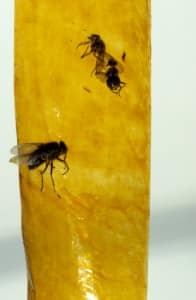 Shifting into Neutral:
Have you ever walked into a restroom and suddenly felt like you were walking on fly paper? That sticky floor experience most likely means the facility is taking the time to mop with a disinfectant. That’s a good thing. It also means they are using too much of the product, or they are using the product too frequently. That’s not so good. The stickiness can be attributed to the Quaternary ammonia compound (quat) found within the disinfectant. In order for any disinfectant to work properly, it must be allowed to dwell for 10-minutes – resulting in an air dry application method. This leaves a quat build-up that is sticky in nature. Is this a bad thing? Yes, for many reasons. As fly paper attracts insects, dust, and debris so too a sticky floor attracts dirt and soil. It may be germ free, but the appearance of the floor will gradually deteriorate.
Have you ever walked into a building and noticed a white residue coating the entrance matting as though it was an armpit sweat mark? That residue is salt residue which means the facility is protecting its patrons by removing potentially hazardous snow and ice. Again, this is a good thing, but it leads to an unsightly interior. That, in turn, leads to a bad first impression.

These examples are commonplace, but often ignored. The solution is neutral pH.

Neutral is a term often equated with periods of war, perhaps most famously attributed to, during the last World War, Switzerland, Sweden, and Portugal. The term conveys passivity; a general lack of action. Time and research, however, revealed these neutral states did indeed take action, some of it less than noble. Regardless, it was a matter of survival. The Swiss claimed neutrality because they didn’t have an army large enough to prevent a German invasion. The Portuguese were worried about their colonies in Africa. And the Swedes had reasons to maintain trade with Germany; receiving coal in exchange for iron ore.[1]

This new understanding, this new definition of an old term, is useful when looking at the cleaning process. Specifically, neutral is active.

The pH of it all:

Chemical build-up, whether sticky or chalky, is the result of an unbalanced pH level. Spill a soda: get a sticky (acidic) soil mark. Allow floor stripper to dry: get a chalky (alkaline) soil mark. To remove these soil types it is necessary to return pH levels to a middle ground – the neutral area – between acid and alkali. This is accomplished by using a cleaner that is opposite in pH to that of the soil or stain. But if neutral is a pH term, referring to the middle point on the scale, what is a neutral cleaner? Can I use it to clean everything?

No, a neutral cleaner will not work on soils that fall on extreme ends of the pH scale. They are manufactured for use on soils that range from 6-8 in pH levels. In fact, most neutral cleaners do not have a truly neutral pH. They actually fall on either the acid or alkali side of the scale, and should be used on soil types that are opposite in hydrogen composition.

Neutral cleaners have gained recently popularity due in large part to their lack of environmental impact. They also have aesthetic benefits, and provide a solution to both problems as discussed above: Scrubbing with a neutral cleaner at least once per week will prevent quat build-up. Extract with a neutral carpet cleaner to prevent salt residue from appearing on entryway mats. Both solutions require a consistent process…and that is anything but passive.

This entry was posted in General Cleaning and tagged neutral, neutral cleaner. Bookmark the permalink.