How to Clean Television Screens

Posted on January 15, 2014 by Worldwide Janitor 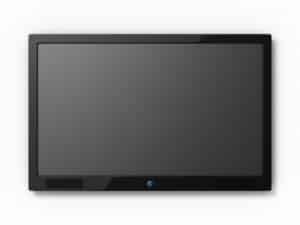 Television screens are everywhere these days. Many restaurants feature them to draw patrons who want to watch sporting events, hotels and hospitals need them to make their guests feel comfortable, schools have them to show educational films and broadcast announcements and retail stores stock for them for sale.
Whatever reasons your business uses a television for, whether personal or business use, it needs to be kept just as clean as other aspects of the building.
Dust is the major enemy for television screens. The electricity emitted from these devices naturally attracts dust. However, because of their sensitive components and new technology, cleaning isn't as simple as running a dampened wash cloth over the surface. In fact, you should NEVER wet a cloth to clean a television or its screen.

Since you've paid good money for the televisions in your business and don't want to harm them, void the warranty or have to replace them, here are some other tips for cleaning the television screen and the surrounding area:

–  DON”T spray cleaning liquids directly onto the screen. Doing so could short out parts located directly behind

–  DON”T clean the television screen while the unit is on. There is a lot of action going on inside the television when it is on and the pixels operating at full force. You also don't want to give yourself a shock.

–  DON'T use paper towels, newspapers, facial tissue or another paper-based product to wipe off the screen. These materials can scratch the surface of the screen. This especially applies to today's flat panel televisions as those screens are composed of softer materials than traditional cathode ray television sets

–  DON'T use a bath towel, dish rag or old clean shirt to wipe the screen, either. These may leave behind hard-to-remove lint

–  DON'T use any kind of spray product near a plasma or flat-screen television. This includes not only cleaning products, but also perfumes and air fresheners. Any type of spray can cause damage to the delicate screen

–  DO read the cleaning instructions that came with your television set, especially if this is your first experience with a flat panel television. Flat-screen TVs need different attention that traditional television sets

–  DO use a cleaner specifically formulated for televisions to clean the areas around the screen. These are designed to not scratch the surface or remove the anti-reflective coating on glass television screens. Professional janitorial supply companies, such as www.WorldwideJanitor.com, offer products like professional strength glass cleaner that can be used on multiple surfaces including televisions. Simply apply with a microfiber cloth. To save money, try a window cleaner concentrate to provide a streak-free shine. Concentrated products have to be diluted with water before application so it stretches out the life of the product while not reducing its strength one bit

–  DO use a microfiber cleaning cloth to gently remove fingerprints, smears or smudges. Be careful not to scrub real hard. Or, use screen wipes that are appropriate for cleaning computer screens

–  DO clean the television before turning it on. Without the action on the screen, it is much easier to see exactly where the spots and smudges are located.

–  DO use a telescopic device with a microfiber cloth attached to the end to clean TV screens that are located up high, such as in a bar or restaurant. This is typically safer and just as effective as climbing up on a step ladder

–  Do regularly dust your television to avoid a heavy build-up of grime and dust.