What’s the Deal With Phosphates?

Posted on September 1, 2014 by Worldwide Janitor 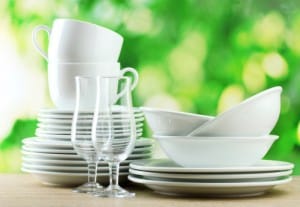 Whether shopping online or at the grocery store, you may have noticed that some dishwashing soap and laundry detergent is labeled “phosphate-free.” Here at Worldwide Janitor, we sell both laundry and dishwashing detergents that are phosphate-free as well as those that contain phosphates. In this article, we’ll talk about what phosphates are, and what advantages and disadvantages they offer.

A History of Phosphates in Cleaning Products

Phosphates are an inorganic chemical that is used in a wide variety of materials and products, including metal polishes, flame retardants, cosmetics, pharmaceuticals, and even some processed foods. One particular kind of phosphate, sodium triphosphate (also known as STPP), has been used for decades in cleaning detergents, specifically dishwashing detergent and laundry detergent, as a “builder,” one of the main components of detergents.

The builder’s job is to soften the water and release hard-to-clean stains and buildup. Phosphates are especially good at removing hard water and calcium deposits that leave a white film and water marks on your dishes. STPP is extremely effective, and as a result has dominated as the primary builder for detergents for many years.

However, in the 1980s, environmental scientists began to notice an increase in algae in lakes and rivers, and they traced it back to urban runoff from phosphates used in cleaning products. Besides making the water cloudy and brown instead of clear and clean, too much algae causes eutrophication, depleting oxygen that fish and other water wildlife need in order to live. Eventually, this can cause all living organisms to die off in these bodies of water. In addition, algae blooms can escalate to toxic levels. Recently, phosphates were blamed for the drinking water contamination in Toledo, Ohio in July 2014.

As a result of the environmental concerns of using phosphates, laundry detergent containing phosphates was banned from being sold in stores in the US, Canada, and several western European countries in the 1990s, and dishwashing detergent has been voluntarily banned by many US states since 2010. These states include: Washington, Virginia, Ohio, Massachusetts, Pennsylvania, Vermont, Montana, New Hampshire, Oregon, Utah, Wisconsin, Indiana, Maryland, Illinois, Minnesota, and Michigan.

Interestingly, these changes occurred with little fanfare and no official notice to consumers. But many consumers did begin to take notice that their dishes were not as clean as they used to be. Phosphates are an unbeatable builder in detergents, and scientists have yet to find an alternative to phosphates that can compete with it’s grime-fighting power. Calcium deposits and stubborn stains remained, even after multiple washes.

In one NPR story about the phenomenon, a woman called the dishwasher technician because she assumed her dishwasher was broken: “The pots and pans were gray, the aluminum was starting to turn black, the glasses had fingerprints and lip prints still on them, and they were starting to get this powdery look to them,” she said. “I’m like, oh, my goodness, my dishwasher must be dying; I better get a new dishwasher.”

Others blamed themselves, thinking they weren’t scrubbing their pans hard enough. However, none of these was the problem. The absence of phosphates from dishwashing detergent was the culprit.

These dishwashing detergents do not contain phosphates:

These laundry detergents do not contain phosphates:

Many people still prefer detergent containing phosphates because they are more effective than non-phosphate detergents. When you are maintaining a restaurant, hotel, or other facility, it is of utmost importance that your dishes are sparkling clean and your laundry is spotless. Worldwide Janitor also sells both laundry detergent and dishwashing detergent that contain phosphates if that is your company’s preference.

While phosphates do have an effect on the environment, they are clearly the superior choice when it comes to effective cleaning. No matter which kind of detergent you prefer, you can find what you need at Worldwide Janitor. Our priority is to provide you with the tools and products that keep your facility sparkling clean and keep your customers satisfied.

6 Responses to What’s the Deal With Phosphates?